GO BACK TO PROJECTOR GUIDE ►

Resolution is the number of dots or pixels used to display an image. Higher resolutions mean that more pixels are used to create the image resulting in a crisper, cleaner image. High resolution is important for projecting detailed charts and graphs, text, and high-definition video. The resolution is indicated by a number combination such as 1920 x 1200. This indicates that there are 1920 dots horizontally across the display by 1200 lines of dots vertically, equaling 2,304,000 total dots that make up the image seen on the screen. 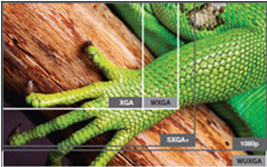 XGA (1024x768 pixels, 4:3 aspect ratio): XGA is widely used. Most computers use XGA as their native resolution, so pairing computers to XGA projectors is common.

WXGA (1280x800 pixels, 16:10 aspect ratio): WXGA is the widescreen version of XGA — delivering the same vertical resolution but providing 20% more horizontal resolution. This has become a common resolution for notebook computers and smartphone.